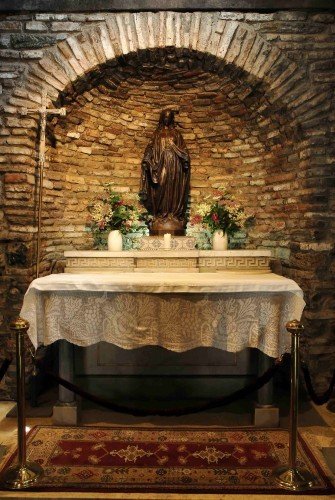 Sister Joy is a devoted Christian and a servant of her beliefs, working at an old and highly respected church in New York, United States of America. She has been walking down the path she believed in with strong steps all her life, ever since she was a little kid thanks to the decent upbringing provided by her parents. As part of her cautious and curious character, she never blindfoldedly went into believing things – she rather did her own research and read a lot before dedicating herself to such things that could be seen as dogma by some part of the world. Seeing her detective nature, the management of the church she works for suddenly decides to put her in charge of the schedule of their funded expeditions. Taking advantage of this, she decides to take the church group for a proper expedition abroad and she knows just the right subject: The Seven Churches of Revelation as she believes nothing else would be more appropriate than the sites which saw the birth and spreading of Christianity in its purest form, so she contacts Travel Booking Turkey by Imperial Travel Turkey for the Seven Churches Turkey Tour.

After setting up each and every service they will require including accommodation, transportation and professional guidance throughout their Seven Churches Turkey Tour with the help of the experienced travel agent from Travel Booking Turkey, she books the tour for her group of 20 people at a reasonable charge since they are booking it ahead. As a part of Travel Booking Turkey’s Special Turkey Tours category, this trip is guaranteed to offer special attention – with every detail planned in a tailor made manner exclusively for Sister Joy’s group. After they arrive in Ataturk Airport of Istanbul, they meet up with their agent who quickly briefs them about their upcoming trip before they board the pre-booked flight to Izmir. Upon landing, they are transferred to their hotel where they grab a delicious dinner before getting a good night’s sleep in preparation for their upcoming journey of 3 days. Their first day begins with breath taking desinations as they venture with their private guide into Smyrna and Pergamum, where they are extesively guided through amazing sites that carried massive importance as they were mentioned in the Book of Revelation. After finishing up in The Red Church as the third spot of the day, they head back downtown Izmir for an overnight stay after dinner. Day three sees them visiting Thyatira which is said to have harbored the false prophet Jezebel, Sardis which was home to the world-renown Temple of Apollo and finally Philadelphia – which was a rather famous one of these three with its Byzantine Basilica. Once they finish up, they head to Pamukkale – one of the oldest healing centres in the world and the site rumored to be the source of Cleopatra’s eternal beauty – where they check into their thermal hotel for some relaxation before an overnight stay. Day four, which is the final day of Sister Joy’s Seven Churches Turkey Tour takes them to the most important of all the Seven Churches of Revelation into Hierapolis and Laodicea located practically right next to  which were in high regards of even the Roman Empire. Their final destination is the ancient city of Ephesus which provides Joy’s group with a chance to do their pilgrimage as Virgin Mary’s last abode is located there along with Saint John’s Basilica – both of which approved by the Vatican to be spots of pilgrimage and are regularly visited by Popes. As they complete their trip in complete spiritual satisfaction, they are dropped off at Izmir Adnan Menderes Airport from where they will take a connecting flight home via Istanbul, with long lasting smiles on their faces as a brilliant result of Sister Joy’s Seven Churches Turkey Tour.

Looking for specific Turkey tours just like Sister Joy’s Seven Churches Turkey Tour? Travel Booking Turkey by Imperial Travel Turkey has got you covered with more options than you could have imagined. All you need to do is go through our specially designed categories and pick one! Want further customization? Fear not, as we specialize in creating tailor made trips that are built according to your budget and preferences.